This is the transcript of Tim Laurence’s address at the inaugural conference of the Association of Christian Postgraduate Groups within IFES Europe’s Postgraduate Initiative, ‘Good News for the University’, delivered from Cambridge by Zoom on Saturday 22 May 2021. 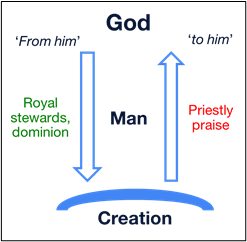 Psalm 8 - chiefly concerned with God’s glory - says we have been placed ‘over the works of your hands’ (Ps. 8:6). Humanity is located in between God and the rest of creation with a particular role as ‘rulers’ (Ps. 8:6). So as we consider the downward arrow we remember our role as royal stewards, whose command is to help creation to flourish and to have dominion. That’s why in our creation-ward vocational work we’re pursuing the common good, we're here to help the European culture to flourish, to serve people, to do good. But then Psalm 8 also observes our Godward function: though in comparison to the starry skies we are as insignificant as ‘babes and infants’, nonetheless from humanity he has ordained priestly praise. Only humans can communicate linguistically and can bring back the glory of an non-verbal creation, verbally, to its creator. So that's the doctrine of creation.   Christ as Context: ‘from him...to him’ - Jesus’ earthly mission and ascension 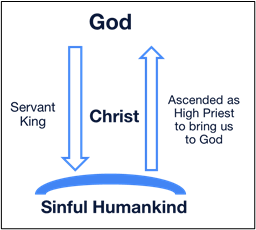 But the fall meant that this dynamic becomes even more clearly Christian, because we now look at Christ's first mission as a man. Given the significance of humanity’s role over creation, and our falleness, Christ came in the first case specifically to sinful humankind (1 Tim 1:15). He came from God as a servant King, and he returned in his ascension after his death, as our high priest, bringing us back to God. So Hebrews is all about this isn't it, picking up the way Psalm 8 foreshadows Christ’s exaltation on our behalf and clearly identifying this with Christ’s priestly role for us in his own atoning death (Heb. 2:6ff). So he brings us with him as one of his own people back to God, saying ‘here I am, and the children you have given me’ (Heb. 2:13), as we, with Christ, ‘sing [God’s] praises.’ (2:12).   Church as context: ‘from him...to him’ - our role on the earth   So, the ‘from him’ and the ‘to him’ movement is in-built to creation and it also characterises Christ’s first mission. But, bringing the two together, it's now shapes the mission of the church and so this is where we will ultimately land our role in the university.    The New Testament teaches that as we are ‘in Christ’ the beginning of our conception of what it means to be Christian is that we are considered relationally or, positionally, with the exalted Christ at God’s right hand (Eph 1:3, 2:6; Col. 3:1f). But our bodies are not yet there because we have work to do before he returns. We have been sent back towards God’s world. Not just in our human role and responsibility to care for God's creation, doing good as royal stewards, but also as royal ambassadors as we bring people to reconciliation with God, as we come and bring God's gospel proclamation (2 Cor. 5:20). In other words, as the church is the next phase of redemptive history - in which, ultimately, heaven and earth unite, the cycle of the church recapitulates both the original role of humanity, exalted from the earth, and also the original mission of Christ, humbling himself from heaven. 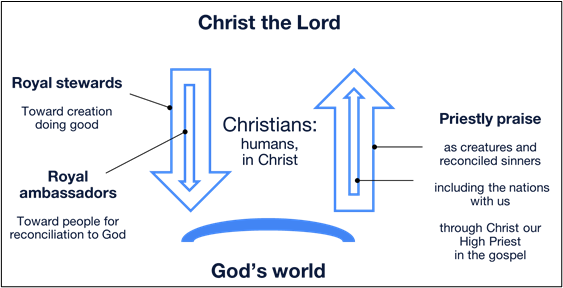 Similarly, as we bring the praise back to God in our priestly capacity, we're bringing our colleagues and our friends with us on the way too, incorporating the nations with us in our return journey of worship to God. As we praise God for our research and in our lives, we draw them into the church community with us, who will one day meet him in the air (Rom. 15:16, 1 Pet. 2:9; 1 Thess. 4:17). The universal church has this cyclical eschatologial dynamic. And so in everything we are ‘from God’ and ‘to God’.   Colleagues as context: ‘from him...to him’ - our local opportunity in the workplace   In the context of the workplace, we can be more specific (see diagram below). Though sent by Christ the supreme Lord of all, this is an age of reconciliation before he returns in judgment, so he asks us to submit to the authorities that we've been given to work under. So in our context in the university the formal paid job given to us as a ‘creation-ward’ researcher or post-doc does not include our broader responsibility for evangelism. It is more limited: although we draw on our Christian motivation and biblical insights, we're being paid not to point to Christ but to promote the good of creation.   However, there is more to being human - and Christian - than the formality of our paid job. So outside it and around it - as we are meeting with our colleagues at the cafeteria, or talking about why we love our subject, and how we make ultimate sense of our discipline - we do verbally and persuasively begin with our common experience as colleagues but then bring all the praise back to God. We can say ‘actually my discipline comes from Christ and it exists for Christ’. For example, if I’m in jurisprudence, I can ask: where do human rights come from? Well, what makes a human special and unique? It is because he's been created in the image of God. But in the Bible these aren’t rights to flaunt for ourselves - Christ the ultimate image of God laid down his life for us on the cross, etc. So outside of my formal paid employment, we’re able to give a wider context, and give all of the glory in public back to the Lord Jesus, which will draw people in. That is part of our evangelistic mission, which, within the workplace, will be grounded in the shared reality and rationality of God’s creation. 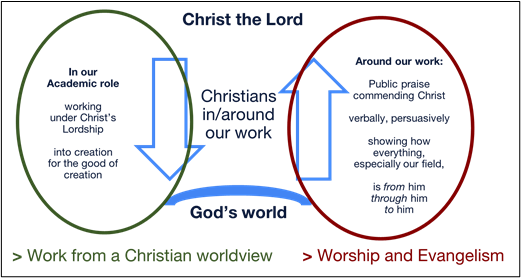 Conclusion: our twofold calling within the university   So that means that we can summarise what we're doing from two points of view. We are doing our formal research work for the good of creation, under Christ’s Lordship, and under the authority of our employer. This means we can share our temporal goals with our right-thinking non-Christian colleagues - seeking to serve creation’s flourishing as humans who are God’s royal stewards. But we also have an extra advantage: as we have been sent from Christ we have the added insights Scripture to draw upon as inspiration and guidance.  And then, around our work, we’re turning our expertise to verbal worship and evangelism: speaking of how everything points back to God.   It’s helpful to realise, particularly for the sake of our postgraduate groups, that we have this twofold task as Christians. Sometimes in our experience these tasks can seem to polarise each other. There might be a familiar voice that says: ‘our calling is all about evangelism and I don't really mind what you're studying - and I don't even know why you're at the university cause you could be working for your church but okay...’. Maybe you’ve come across that sort of argument, which has no real place for the work of the university. But then, in contrast, you have those who are so concerned not to be identified as the former voice, and who say that we glorify God primarily by contributing to the common good and getting on with doing our work well, and contributing to cultural flourishing. But then what's happened to our speaking of Christ, and they fact his glory is shown most in the gospel?   But as we have seen from the integrated vision of Christ’s glory in creation and redemption, these two things actually fit together – they are distinct, but interdependent. They are part of the same intellectual system but, teleologically (that is, in terms of purpose), they’re two different activities, and can be helpfully identified through our twofold orientation.  Vocationally, we are orientated towards God’s creation for its flourishing. This doesn’t mean we don’t operate under Christ’s Lordship - of course not - we have a creationward orientation because we are coming to it ‘from him’. So we draw on our background including our biblical insights. Of course, in some disciplines it won't seem that what we're doing is very different to what a non-Christian would do but even then we understand that we're doing it as God's servant and have a clear purpose to benefit his creation. Conversely, as we bring all the glory back to him - and speak evangelistically from the starting point of shared human experience, and the signposts of our field - it is essential that it is the person of Christ and not his creation, which is the final object of our attention and the goal of our conversation.   So this sense of our shared mission, or purpose, as Christians within the university, serves as a long worked example as to how the comprehensive supremacy of Christ yields a sharper clarity to why we're here in the university. In contrast to a secular vision, it means we're not here simply to celebrate an absolute academic autonomy, leading to individual clashes of egos and the fragmentation of the disciplines and fractured relationships. No, we can work together across disciplines within our postgraduate groups, where all of us as Christians share the same basic sense of a twofold calling, as to what we're doing in the Academy. It means that we're working from Christ to our research serving the common good as Christians, drawing on all that we know of reality through Christ and his scriptures. And as we do this, we're going to be pointing people from our research to Christ - to the one from whom it all came, and the one for whom it exists, and so we have that evangelistic goal as well. Clearly, in terms of cultural experiences or backgrounds, some of us will be more naturally wired toward understanding the role of a Christian academic group as being focussed more on the one or the other but together as a group we can serve each other and show that there's a place for each of our different gifts and interests.   Hence for the IFES Europe Postgraduate Initiative, ‘Good News for the University’ we have a twofold common mission:     Much more briefly, we can sketch two more ways in which a vision of Christ’s glory can unite us as Christians and contrast favourably with our contemporary secular context.
© Gospel and Academia Project, prepared on behalf of Good News for the University