This is the transcript of Tim Laurence’s address at the inaugural conference of the Association of Christian Postgraduate Groups within IFES Europe’s Postgraduate Initiative, ‘Good News for the University’, delivered from Cambridge by Zoom on Saturday 22 May 2021.
Our gathering today represents a strange and exciting paradox.   Why? On the one hand we could say that this is an historic moment. This is the first time there has been a pan-European initiative for Christian postgraduate student groups. We're meeting within IFES, the International Fellowship for Christian Evangelical Students, formalised in 1947. In Europe, until now, IFES has focussed primarily on undergraduate groups and high school work. There has only been limited and occasional activity organised at some national levels for postgraduate or doctoral students: but only in a handful of places on a small scale. So, you could say that this is an historic moment.   But, on the other hand, from another perspective, this isn't a ‘first’ at all. Instead, it could be seen as a small return to something which was once bigger, as the whole of the global university movement emerged from European Christianity in the mediaeval period. Whether Bologna, Paris, Oxford or Cambridge, all these universities arose from cathedral or monastic schools. Before long the popes granted status to different institutions so that a Master’s degree (for us that's the beginning of postgraduate studies) earned you the right to teach in any other university in Christian Europe.   So we have this paradox. We are self-consciously coming together across Europe and yet by their origin, postgraduate degrees in Europe since the 13th century have existed as a Christian association.   Rejection and Recovery   How do we explain this paradox? Well of course the problem is that in between now and the mediaeval period there has been a rationalistic European enlightenment which led to a period of secularization in which Christianity often became considered as the enemy to intellectual progress rather than as the foundation of it.   So that gives a more particular significance to what we're doing. It means that as communities of Christian Master’s and doctoral students associating across Europe - around a Christian intellectual foundation - we are in effect reclaiming the university tradition.   There’s also a biblical precedent for this motif: where something very important is rejected, but then gets recovered. In biblical terms we can think of Psalm 118:22 (quoted in Matt. 21:42, Acts 4:11, 1 Pet 2:7): ‘the stone that builders rejected has become the chief cornerstone'. Consider the way that Jewish leaders rejected their Messiah who turned out to have been the very Person on whom their whole nation was built, and whose death and resurrection would prove to be the foundation of the church.   There’s also another precedent for this motif in the western tradition, one which strongly influenced mediaeval Christianity itself: Augustine’s ‘The City of God’. It stands at over 1000 pages and is one of the most significant achievements of western intellectual history. Why was it written? It looks back to the fall of Rome and it stands as a reply from Augustine to the contemporary pagans who felt that the softness of Christianity was to blame for the fall of the Roman Empire. But Augustine says, no, on the contrary. It was the political and moral tradition of the Roman Empire which was bankrupt, and Christianity should not be the villain of the story but it actually provides the superior intellectual vision and a superior comprehensive account of human culture within this world.   Do you see the parallel with late modernity? The question is, do we follow European secularism and say that Christianity is a hindrance to the academic community - that Christianity is the problem? Or do we follow earlier European history and Augustine's own example and say that Christianity actually provides the better foundation for a strong academic community?   Clearly it's possible that the emergence and the flourishing of our own Christian postgraduate groups can now provide one visible embodiment of the way that Christianity can inspire a renaissance of true academic flourishing. This is a possible vision, isn't it?   But what substantive reason do we have to think that this could be the case? Why is it that all Christian postgraduate groups could in fact offer a small embodiment of the strength of Christianity for the academic community?
I.  Our Main Idea: The Glory of Christ
Our big idea is the glory of Christ: Christ who is over creation and over redemption. This is why we think that Christianity can provide a total intellectual system and can provide a foundation for Western culture.   Colossians 1:15-20   Look at this text from Colossians 1, introduced by Paul, as referring to the beloved Son of the Father: 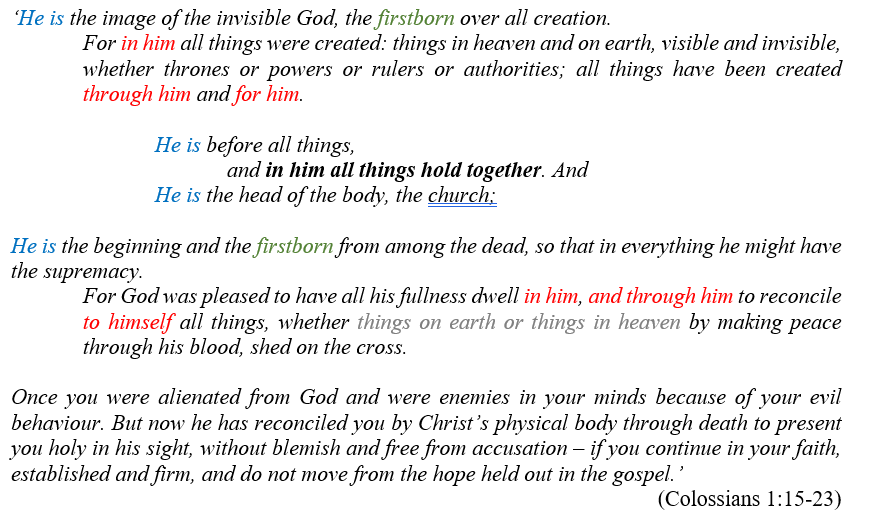